Last spring, Youngstown State University fashion instructor Jennifer Frank masterminded the university’s first  EveryBODY Fashion Show. The event was a fashion show that accepted people of all different shapes and sizes in order to raise awareness for eating disorders.

The fashion show was sponsored by the Danielle L. Peters Endowment to Promote Awareness of Eating Disorders. Peters was a fashion merchandising student at YSU who passed away in 2012 due to complications with bulimia nervosa. She was only 21 years old.

The EveryBODY Fashion Show aims to make all people feel beautiful in their own skin,Frank said. For many people, the pressure to feel beautiful causes some to take drastic measures to reach unrealistic body standards, such as those portrayed in the media.

“Our goal was to make everyone realize that your size does not have anything to do with your beauty,” Frank said of the purpose of EveryBODY.

“Your beauty comes from within your heart. We used models of all shapes and sizes to get our point across.”

The fashion show also featured guest speaker Nina Schubert. Schubert is a Kent State University education student who previously battled with an eating disorder in the past. She is currently working for the National Eating Disorder Association (NEDA).

At the show, Schubert said, “I shared my story of struggle and how I was able to get on the road of recovery. I shared the ups and downs of my recovery and how important it is to get help if you are struggling.“

Specifically, as stated in a 2012 study in the International Journal of Eating Disorders, young people between the ages of 15-24 suffering from anorexia are ten times more likely to die compared to their peers.

Rachel George, a dietitian from Struthers, Ohio detailed the differences between the two disorders.

“A lot of people confuse anorexia and bulimia,” George said.

“When someone is suffering from anorexia, that means they essentially starve themselves. They rarely eat regular meals and when they do eat, it’s bland foods. Crackers here and there, very small portioned snacks maybe 1-3 times a day. They rarely intake any liquids as well. They take laxatives or any other type of drug that ‘dissolves fat’ or promotes weight loss, or detoxes.”

George described bulimia as “the physical purging of foods after it’s been ingested.”

“People with this eating disorder often pig out on any or all foods they can get their hands on, then once they’ve stuffed their stomachs to max capacity, they throw up, not allowing their body to hold on to any of the nutrients they just took in,” George said.

The problem with eating disorders extends beyond the effects they have on a person’s body.

The Problem With Reporting Eating Disorders

Unfortunately, due to the nature of eating disorders, many people do not report their disorders nor do they receive help for them. According to Walden Behavioral Care, a eating disorder treatment center, only 20 percent of adolescents seek out help in dealing with an eating disorder.

Shannon O’Connor, an eating disorder researcher and professor of psychology at the University of Chicago, explained why she believes why so many people choose not to report or seek help for their eating disorder.

“While individuals may view their eating disorder thoughts and behaviors as problematic, they may not recognize the extent to which their behaviors are dangerous and need attention,” O’Connor said.

“Medical complications are common in eating disorders, particularly with individuals significantly restricting their food intake, purging, and/or abusing laxatives or diuretics; however, it is quite common for individuals to not realize the damage being done or minimize these complications. In fact, this is a core feature of anorexia nervosa – a lack of recognition of the seriousness of maintaining a low weight.”

Dr. Ann Jaronski, the director of student counseling services at YSU cited some other reasons why people are hesitant to seek help.

“Eating disorders treatment is a specialty that not all mental health providers can treat effectively,“ Jaronski said.

“Finding a specialist in your area that takes your insurance can be difficult. Not all insurance covers treatment for eating disorders”.

Jaronski also explained that people with eating disorders may often be suffering with other mental health issues, as well.

The term comorbidity refers to the presence of multiple chronic conditions in a single patient.

This data was taken from a study of 127 women and 21 men who were admitted to hospitals for eating disorders between October 2010 and April 2014 in the United States. The findings are illustrated in the following bar graph. 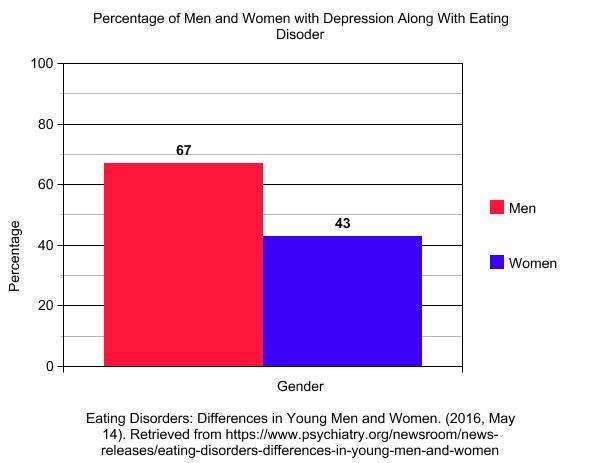 In addition to the financial constraints of insurance, many people are unaware of how damaging an eating disorder can be until it’s too late.

The precedent of under reporting eating disorders also extends to a lack of available current research on the topic. Because many people don’t report their disorders, data is relatively scarce on the subject and is not reflective of how many people in the United States that have an eating disorder.

This is evidenced by data obtained via the Centers of Disease Control (CDC) Wonder service which was surprisingly sparse. When searching for data for deaths with eating disorders as a mitigating cause for Ohio residents between the ages of 15 to 24 in the past 10 years, all the data was suppressed – meaning the numbers reported were either too low to form a statistical opinion regarding prevalence, or were non-existent from a population analysis point of view.

When searching data of deaths of U.S. residents ages 15-24 between 2012 and 2016 with any mention of F50 (the CDC’s code for eating disorders related information within death records), only 70 deaths were recorded for this age range and within this time frame. The highest death count was attributed to anorexia, with 27 deaths listing anorexia as contributing factor of the death itself.Behind anorexia was bulimia with 14 deaths.

An 18 year old male resident of the United Kingdom who wished not to be named for this article discussed his experience of being a part of one such Internet community.

This person who suffers from both anorexia and bulimia, was an active member of social media site Reddit’s Pro-ED subreddit community before it was banned from the site on November 14, 2018, citing content policy violation, specifically content that encourages physical harm to its users.

This UK resident explained his perspective on pro-ED communities.

“I find help because we are all going through the same thing and we all know how hard it is to be us and that I can access a large amount of help and harm reduction from these.”

This person, however, did not consider himself to be pro-ED, stating he only participated in the community, and described a dual purpose of the subreddit community.

“I personally think a large amount use Pro-ED to gain tips and tricks to lose weight as the majority of people are fat and gluttonous so they want to become anorexic.” the user said.

“However, they do not realize it is a mental illness. But the others like me use it for the same reasons granted a few are very competitive so it’s nice to see someone who is 10/15kg (20/33 lbs) thinner at the same height and try and see what their journey is. At my height and weight it’s rare to see someone 7kg (15 lbs) thinner than me let alone 15kg (33 lbs).”

O’Connor cited the “thin-ideal” as a compelling reason for many to participate in pro-ED communities. O’Connor gave other details as to why those suffering from eating disorders might join in.

“Being in a state of starvation can also make it more likely to become preoccupied with food/weight/shape (check out the Minnesota Starvation Experiment of 1944-1945). Thus, for individuals engaging in restriction, they may seek out these websites because they are physiological more primed to think about food/weight/shape etc,” O’Connor said.

“While a lot of ‘support’ communities (usually via social media platforms) can be caring and help someone experiencing a problem move toward wellness, pro-eating disorder communities can in fact do the opposite and be harmful by promoting the negative thinking and behavior that fuels an eating disorder,” Jaronski said.

There is still much work to be done in improving the care of those suffering from eating disorders. These changes range from new legislation to advances in healthcare.

“In the last 50 years with each subsequent edition of the DSM, we have improved our ability to reliably diagnosis disorders (i.e., increase the likelihood you would receive the same diagnosis if you went to two different doctors). This increase in reliability resulted from setting specific criteria that must be met to warrant a diagnosis, “ O’Connor said.

“I believe in the coming years with a better understanding of the mechanisms underlying eating disorders, we will be able to better target those mechanisms and improve treatment and prevention efforts.”

Schubert stressed the importance of education in helping to prevent eating disorders.

“I think proper education in schools can help by educating teachers and faculty.”

“I think having conversations about the signs and benefits of recovery can help students feel less alone and more aware of options for help,” Schubert said.

Jaronski provided suggestions on how communities can be better equipped to deal with eating disorders. Some of these suggestions include working on reducing the negative stigma associated with mental health care as well governments increasing the mental health resources for those who do seek help.

For those who are seeking help for an eating disorder, there are a variety of resources to choose from. These include speaking to a school counselor, a therapist, or a general practitioner. These professionals can refer you to eating disorder specialists who have the resources and knowledge to help effectively.