Ohioans are urged to tell officers during a traffic stop that they are armed with a weapon, but under the new law some may hide this important information. If an Ohio citizen lies to police by saying they do not have a firearm, they could face a misdemeanor charge.

Before this new law, Ohio citizens would have to complete eight hours of training and pass a background check to obtain a permit. This eight-hour course is broken down by six hours of “class” and two hours at the shooting range to practice marksmanship.

The class portion will teach citizens the legalities of what happens after a shooting, how to handle and shoot a firearm, and self-defense tactics. The course is completed once the person passes the written test and the marksman test.

Once a CCW permit is successfully acquired, the person will be registered as having the permit and police will see this if the pull someone over and search their name. The license is applicable in 39 other states and the license is good for five years.

To learn to which 39 states the permit applies, click here.

​Johnathan Yurco is a CCW instructor from Youngstown, Ohio, and he had this to say about the new law: “I think the new law is great because America is built on choices, and we should have the choice to arm ourselves.”

​Yurco said he still believes having a permit is a great tool to have in order for someone to defend themselves, but “I think this is a great movement four our second amendment rights, but with great power comes great responsibility.”

The chart below created by Armed2Defend, shows the number of licenses issued to Ohio citizens from past years. Each year shows the new permits that were issued and how many of those permits were renewed. It is assumed that after this law is in place the numbers may drop. 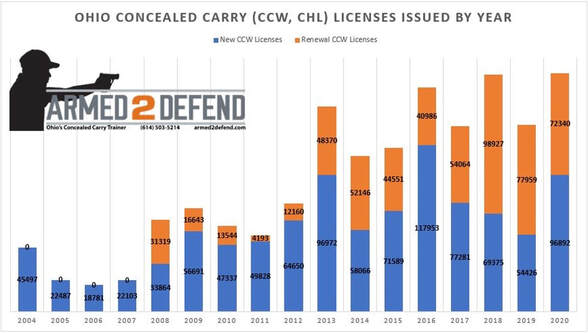 Armed2Defend was created to teach civilians the importance of firearm training and having a CCW permit. You can learn more about Armed2Defend and its training guide by clicking here.

Gun violence in Ohio has increased in since 2018, reaching all-time highs in 2020 and 2021. Some Ohioans’ believe that the people committing these crimes do not have a CCW permit so the new law won’t be the cause of a potential increase.

The chart below created by Jake Zuckerman from The Ohio Capital Journal shows the number of deaths due to gun violence from 2007-2021. Check out this website to learn more about gun violence in Ohio. 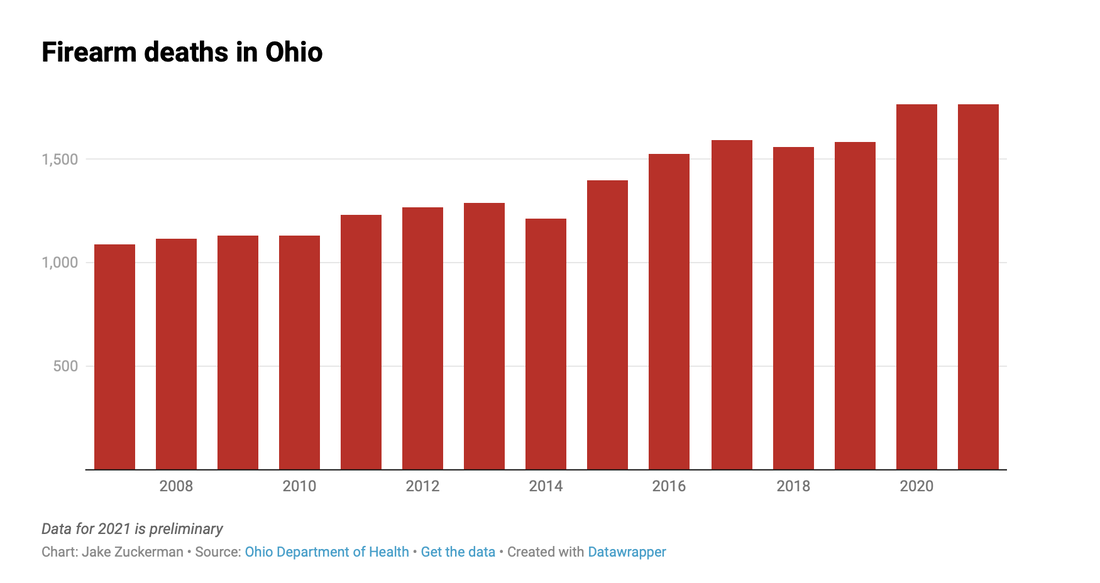 The idea of not completing a background check is one that many Ohioans are not happy about. The steady increase of gun violence in Ohio and mass shootings across America create a continuous debate about gun control. Many believe a more extensive background check can prevent such crimes.

Another worry is that now it is going to be harder for police to find out if someone is carrying a weapon on them whether that is at a traffic stop or on the street. This doesn’t make the job easier for the police, and it adds concern of the ongoing issue of potential police misconduct.

“It definitely makes our jobs harder now and it doesn’t help both parties involved,” Mike Wright, officer for the Toledo Police Department, says. “With issues that are going on in the world involving the police, we have to think more about our safety if we don’t know if someone is carrying a weapon.”

This law brings up a lot of conversation, debates, or even worries for many Ohioans. The law will be in full effect in June 2022.